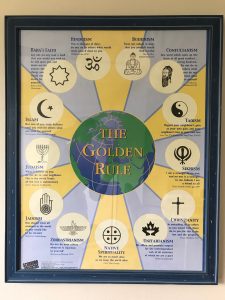 This poster of the Golden Rule hangs on the wall of my home office. 13 definitions or interpretations of that Golden Rule from 13 different religions or faiths surround the image of the Earth.

I have loved this poster from the moment I saw it because it felt like coming home. Let me explain.

Born and raised a Christian in the Presbyterian Church, I became familiar with the Golden Rule through the importance my parents placed on respect for all, and through the teachings of my church and Sunday School.

I also briefly studied other religions – some of which fascinated and felt familiar to me – during the High School years of my education.

I don’t have a memory of the Golden Rule being a part of the study of those other religions, however. I only ever connected the Golden Rule with the teachings of Jesus until I saw this poster.

For as long as I am able to remember, I have always felt that we are all from the same source. I am fortunate in that I did not grow up in an ethnically, culturally, racially or religiously divided area of the world and so I did not experience the divisiveness or “us against them” atmosphere that such an upbringing can promote or ingrain.

And so when I saw this poster, my personal beliefs and intuition felt validated. That feeling of coming or being at home!

As I considered writing about the Golden Rule, I thought I would look up the origin. Suffice it to say that Christianity is first in laying claim to it coming from Jesus. Look a little further and it appears to have been around in some form or other since time immemorial and the dawn of man.

In the end, what does it matter? Is it really important who first uttered the words? This is where we humans fall short of actually living the Golden Rule. Attempting to own something or someone, to be the first, the winner, a follower of the one true God. This represents the antithesis of the Golden Rule.

It is easy to utter words, to recite a prayer, to proclaim a faith. It is much more challenging to live by those words, prayers and faiths. Actions speak louder than words, as the saying goes.

What was of most interest to me was that people have been aware of and promoting the basic concept of respect and empathy for all people for as long as we have the records. Isn’t this what matters most?

In times of accelerated growth and change as a people and a planet, this concept is most tested as not everyone is comfortable with or able to grasp the tide of change that begins to sweep across the globe. And so there are a number of people who would prefer to hold tightly to a more comfortable picture or image – think close up as opposed to panoramic – and I understand that. I am not a fan of roller-coasters and yet I have ridden them.

I look at and read my poster daily and it seems so simple.

Can you interact with someone who represents the complete opposite of everything you stand for and still treat them with empathy and in a manner you would wish to be treated?

I don’t believe this means relinquishing your power or tolerating disrespect. If you were behaving badly, would you want your obnoxious self at that moment to be respectfully shown that your behavior is inappropriate? It might not be comfortable at the time, but another person is taking time and effort to offer you some assistance in re-connecting with your humanity. This is invoking the Golden Rule.

In my work, I help people manage pain, move through change, recover from illness or injury, step back from stress and expectation regardless of culture, religion, ethnicity. And I am challenged daily to attempt to live by the Golden Rule.

If you’re looking for some new growth, want to push the re-set button, change direction or simply make a difference in this diametrically opposed and challenged world, I suggest attempting to live the Golden Rule daily for a week.

Let me know how it goes.